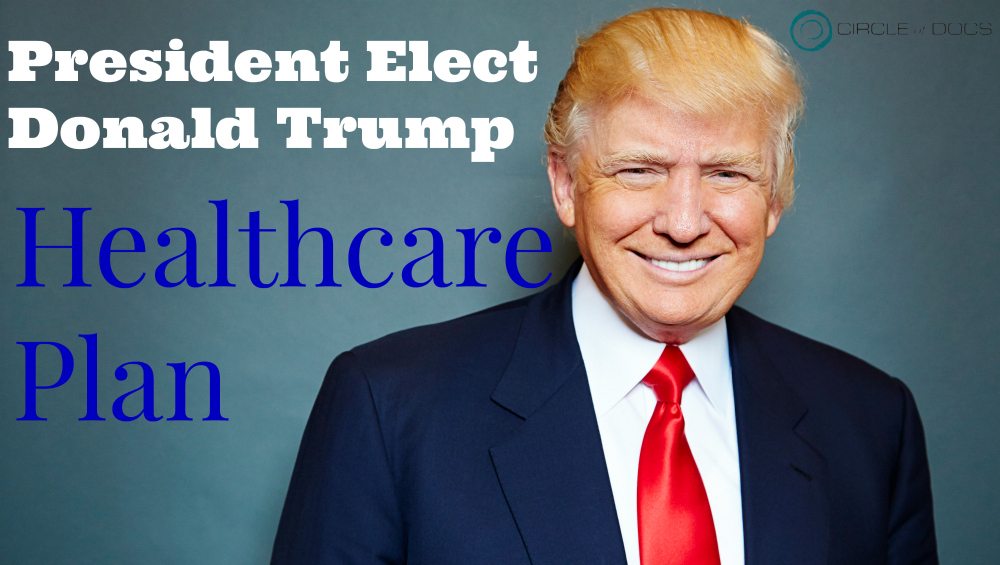 Now that America has elected Donald Trump to be the next President of the United States, many are wondering what that looks like from a healthcare perspective.  The team at COD did some investigating and here is what we have found:

Here is what President elect Mr. Trumps website has to say:  DonaldJTrump.com

Since March of 2010, the American people have had to suffer under the incredible economic burden of the Affordable Care Act—Obamacare. This legislation, passed by totally partisan votes in the House and Senate and signed into law by the most divisive and partisan President in American history, has tragically but predictably resulted in runaway costs, websites that don’t work, greater rationing of care, higher premiums, less competition and fewer choices. Obamacare has raised the economic uncertainty of every single person residing in this country. As it appears Obamacare is certain to collapse of its own weight, the damage done by the Democrats and President Obama, and abetted by the Supreme Court, will be difficult to repair unless the next President and a Republican congress lead the effort to bring much-needed free market reforms to the healthcare industry.

But none of these positive reforms can be accomplished without Obamacare repeal. On day one of the Trump Administration, we will ask Congress to immediately deliver a full repeal of Obamacare. 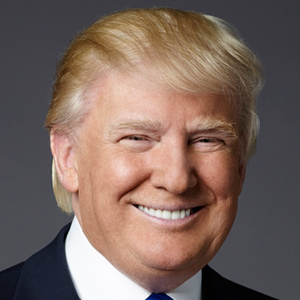 However, it is not enough to simply repeal this terrible legislation. We will work with Congress to make sure we have a series of reforms ready for implementation that follow free market principles and that will restore economic freedom and certainty to everyone in this country. By following free market principles and working together to create sound public policy that will broaden healthcare access, make healthcare more affordable and improve the quality of the care available to all Americans.

Any reform effort must begin with Congress. Since Obamacare became law, conservative Republicans have been offering reforms that can be delivered individually or as part of more comprehensive reform efforts. In the remaining sections of this policy paper, several reforms will be offered that should be considered by Congress so that on the first day of the Trump Administration, we can start the process of restoring faith in government and economic liberty to the people.

Congress must act. Our elected representatives in the House and Senate must: 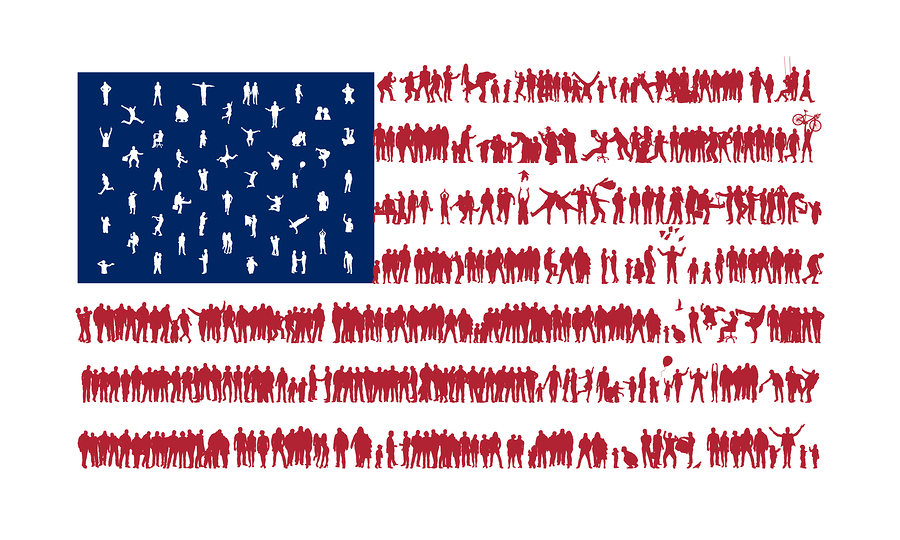 The reforms outlined above will lower healthcare costs for all Americans. They are simply a place to start. There are other reforms that might be considered if they serve to lower costs, remove uncertainty and provide financial security for all Americans. And we must also take actions in other policy areas to lower healthcare costs and burdens. Enforcing immigration laws, eliminating fraud and waste and energizing our economy will relieve the economic pressures felt by every American. It is the moral responsibility of a nation’s government to do what is best for the people and what is in the interest of securing the future of the nation.

Providing healthcare to illegal immigrants costs us some $11 billion annually. If we were to simply enforce the current immigration laws and restrict the unbridled granting of visas to this country, we could relieve healthcare cost pressures on state and local governments.

To reduce the number of individuals needing access to programs like Medicaid and Children’s Health Insurance Program we will need to install programs that grow the economy and bring capital and jobs back to America. The best social program has always been a job – and taking care of our economy will go a long way towards reducing our dependence on public health programs.

Finally, we need to reform our mental health programs and institutions in this country. Families, without the ability to get the information needed to help those who are ailing, are too often not given the tools to help their loved ones. There are promising reforms being developed in Congress that should receive bi-partisan support.

A couple of hot button topics surrounding the healthcare world involves the use and implementation of vaccinations and the role of the pharmaceutical companies.

Here is a recent conversation Trump had on Fox News:

“I’ve seen people where they have a perfectly healthy child, and they go for the vaccinations, and a month later the child is no longer healthy,” Trump said on Fox in 2012. “It happened to somebody that worked for me recently. I mean, they had this beautiful child, not a problem in the world. And all of a sudden, they go in, they get this monster shot. You ever see the size of it? It’s like they’re pumping in — you know, it’s terrible, the amount. And they pump this into this little body. And then all of the sudden, the child is different a month later. And I strongly believe that’s it.”

During the GOP debate in September 2015 he spoke about that supposed case again, and claimed that vaccines were causing an “autism epidemic.”

“People that work for me, just the other day, two years old, beautiful child went to have the vaccine and came back and a week later, got a tremendous fever, got very, very sick, now is autistic,” he said.

Here a few of his tweets surrounding the situation: 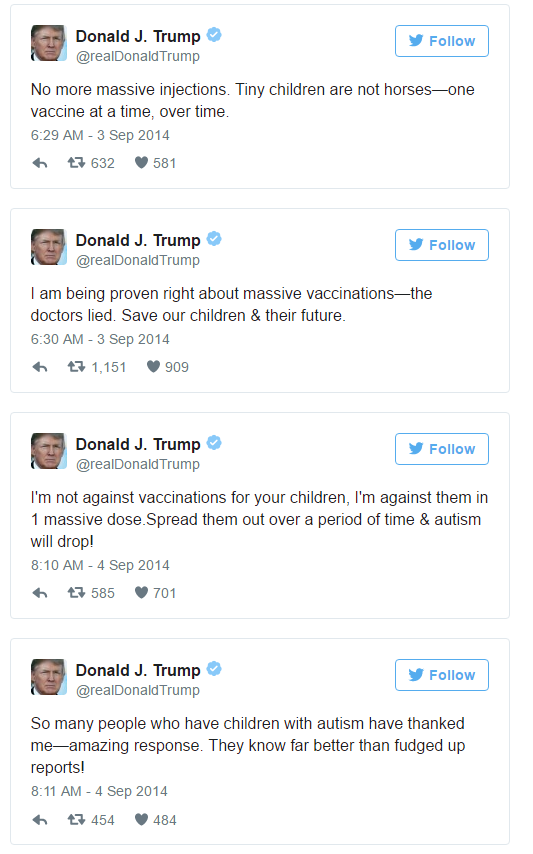 How About BIG PHARMA?

Here are some thoughts from Statnews.com written by Charles D. Rosen, MD, the cofounder and president of the Association for Medical Ethics and clinical professor of orthopaedic surgery at the University of California, Irvine, School of Medicine.

“Trump is right when he says that drug companies control the landscape. He appears to be willing to call it as it is and not worry about repercussions from the powerful drug interests, and has moved in the right direction in saying he would let Medicare negotiate with pharmaceutical companies if he becomes president. Hillary Clinton, on the other hand, accepted more cash from pharmaceutical companies in the first six months of her campaign than any other candidate in either party. This lessens the potency of her claims to take similar action and suggests yet again disingenuous declarations. If she claims to be such an enemy of Big Pharma, then why are they contributing to her campaign?

Trump looks at the world through the prism of commerce. The situation we are in with pharmaceuticals and medical devices makes no sense to him. As a physician, I think it’s near criminal that special interests come before my patients. The drug lobbies have succeeded in making the importation of prescription drugs illegal under various self-serving agendas, disguised as “for the public good” and “protecting the drug companies” so they can continue to innovate.

Big Pharma is big business; its objective is to make money for its stockholders. There’s nothing wrong with that, but don’t be fooled by the avalanche of ads positioning these corporations as do-gooders. It’s well-known that drug companies’ budgets for marketing are higher than for R&D. That false tune of the cost of innovation is plain stupid and a lie.

Unlike Hillary Clinton, whose campaign coffer is loaded with contributions from drug companies, Trump has barely dipped into that pot of besmirched gold. Yes, Trump is defying Republican dogma, but he’s honestly and forthrightly calling Big Pharma on its Big Baloney.

The same indictments of Big Pharma go to the heart of medical device manufacturers. Their control of the landscape and funding of the FDA is the fox guarding the hen house.

Whether it is drugs such as Vioxx or Avandia that are released without adequate vetting under industry pressure and kill over a hundred thousand people, or a medical device (Infuse) that includes bone growth proteins that led to sterility in men, it is the same story. Money buys influence, and these companies continue to sell the Kool-Aid that their goal is to improve the health and welfare of the American public.

What say you the people? Where do you think the American Healthcare situation is going? 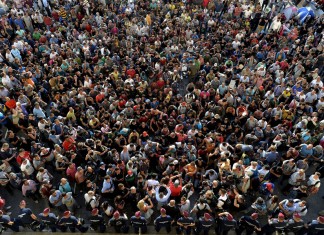